Quick -Release Battery Canopy System
Our battery racks are equipped with four 16,000mAh-22,000mAh lithium polymer batteries at a time. Our battery quick release system is simple to use and extremely efficient.

Features:
Swap out up to 4x 30,000 mAh LiPo batteries in just seconds.
Securely fastens the batteries in the drone
Protects from dust and water
Able to mount multiple positioning sensors, including GPS/GNSS, RTK GPS, and 360 LiDAR to the canopy.

Collapsible Booms
The Carrier Hx8’s patent-pending foldable design crowns the Hx8 as the most foldable heavy-lift drone on the market. The Carrier’s booms can be secured in their ready position in just seconds with our foldable boom hinge mechanism.

Features:
With up to 21” wide of mounting space*, the Hx8 is capable of carrying massive payloads**
Composed of Carbon Fiber and Lightweight Onyx Material (tough nylon with micro-carbon reinforcement)
Leave Go-Pro sized HD camera and/or Flir-sized Thermal Imaging camera attached when folded down for transport.

360° LIDAR for Object Avoidance
The Carrier Hx8 has an optional 360 degree LiDAR obstacle avoidance system that can be mounted on the top of the drone in the center of the battery canopy.

With a 68-71” wingspan depending on propeller size & platform series chosen, the geometry of the Carrier Hx8 is incredibly stable at very high speeds 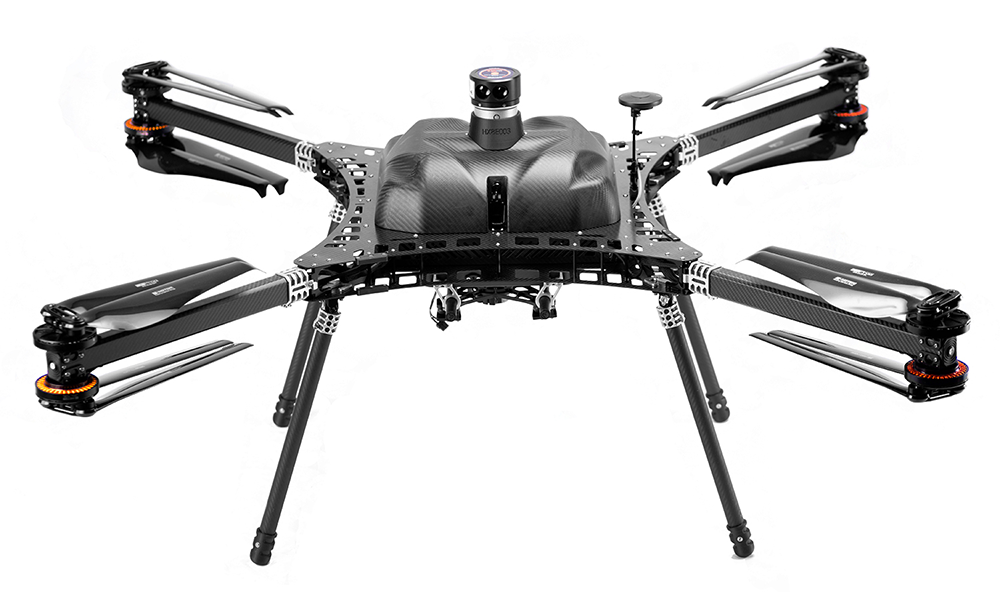 With payload and flight readiness in mind, the Hx8 framework and other utilized hardware have been thoughtfully designed with over 4 years of development. The Carrier Hx8 is manufactured in the USA with the tightest tolerances to ensure the ultimate satisfaction for our customers.